A table has been booked for Saturday night after Dr Moody's talk at Gargadoras Taverna by the beach for 9.00 p.m. I have to confirm final numbers for the meal tomorrow night, so if you want to come along and haven't let me know, please can you do so asap. The slideshow and talk will be very well attended and the meal will give people a chance to meet Dr Moody and enjoy a very pleasant evening.
Posted by Unknown at 10:05 No comments: 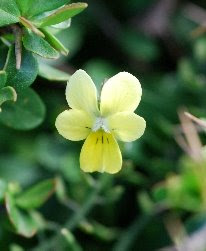 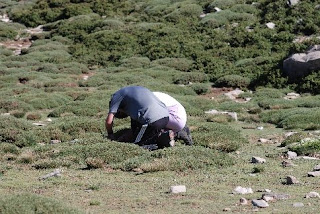 I have been sadly remiss in not getting on with the newsletter and updating the website in the last few months. Ill health and pressure of other work is to blame, but I am now looking through the vast numbers of photos I have taken since March in the hope that I will actually get some work done. One particular photo that reminded me of a brilliant day out was this one of Rosemary and Nick Turland botanising on Psiloritis in June. We had a terrific time with Nick and Chris and I was thrilled to find Viola fragrans for the first time on this trip.
Posted by Unknown at 08:24 No comments:

The bazaar at Cindy's Bar was a great success and helped raised much need funds for Flowers of Crete. The next event is Dr Jennifer Moody's talk at BioAroma on Saturday. We are taking a break in August and ur next event will be another bazaar in September. We are in need of good quality bric-a-brac to sell please and would be grateful if anyone with anything to donate could get in touch with one of the committee members before the middle of September.
Posted by Unknown at 08:20 No comments:

There will be a bazaar for Flowers of Crete at Cindy's Bar 10.00 - 1.00 pm on Sunday 19th July. Loads of books, home baking, DVDs and videos and bric a brac. Please come along and support our cause. The sylogos papers are now completed (at last) and ready to go to court for a hearing date.
Posted by Unknown at 14:24 3 comments:

Another of my Watercolours 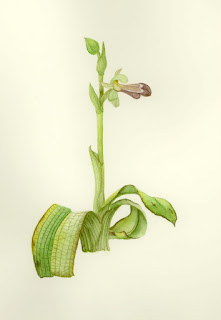 This time an endemic ophrys which grows not too far from Pano Elounda on the mountains around Thripti.
Posted by Unknown at 16:52 No comments:

Have done a Google search and it could be a young Pelophylax cretensis - endemic water frog from Crete. Any help on identification would be welcome.
Posted by Unknown at 09:14 No comments: 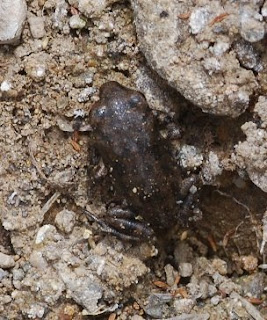 I was asked to collect some leaves of C. spatulata for a professor at the University of Florida. Steve Lenton kindly showed me where there were still some in flower on the Katharo and the dried leaves are now on their way. While we were there, we found several small pools of water left in the almost dry river bed. These pools were full of tadpoles, some of which had still not developed legs and seem doomed to die in the scorching heat. However, the whole area was alive with tiny toads or frogs (no idea which) and I managed to get this photo of one that had just left the water. It looks quite menacing as it is totally black and I would be very interested to know what species it is.
Posted by Unknown at 09:04 No comments:

Posters are going out now for Dr Moody's talk on the climate changes in Crete over the centuries and there is a lot of interest. I am arranging a meal afterwards for people to meet Dr Moody and anyone who would like to attend is please asked to let me know, so that I can book a table (tables) at the restaurant.
Posted by Unknown at 08:42 No comments: